Middle Managers: Your chances for promotion aren't as slim as you think 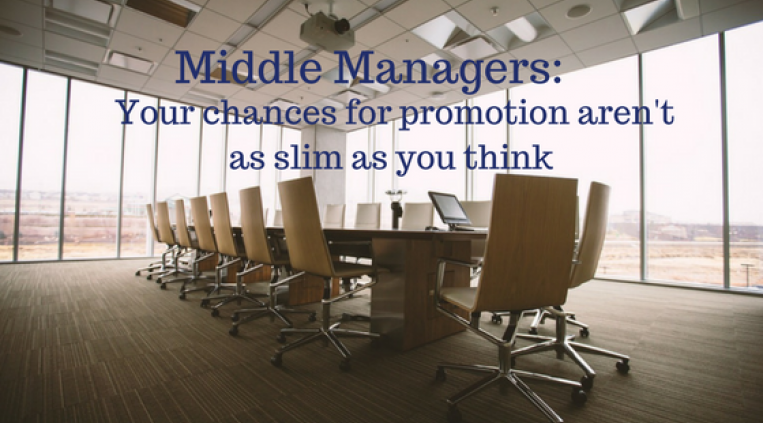 Should you go for a promotion even if you don’t have a chance? This is a question that many middle managers ask - especially after having missed out on previous opportunities and of course one of the most important factors affecting career development. All middle managers know the dangers of not getting promoted - eternal Middledom - and therefore you should consider things carefully before deciding you don’t have a chance.

My 35 years of experience have taught me that the number one reason middle managers give up before reaching the promotion starting line is fear - especially fear of what others will think if you are rejected yet again. How will you face your co-workers? Your subordinates? Your superiors? Can you afford to lose face?

There are so many unanswered questions and unsolved variables that you might decide that eternal Middledom is preferable than putting yourself out there and coming home empty handed.

This post is dedicated to you, who might be hesitating about applying for a promotion which you think you don’t have a chance for. But I’d like to share a few thoughts before you throw in the towel and give up on one of the essential factors affecting career development.

Who’s the first person you should consult with about a promotion opportunity? Your boss? Your colleagues? Your significant other? No, no, and no. The first person is you. You and nobody else but you can decide whether to give yourself a chance.

Fortunately, over the years, I have conducted extensive research on answering this very question and can offer you two practical tools. The first one will help you find out if you’re ready for promotion, while the second one gives you the main reasons why many middle managers are rejected, even though they shouldn’t have been.

Armed with this valuable information, my guess is that you’ll realize that it’s worth giving yourself a fighting chance.  I say “fighting” because there are some things out there that will require some fight on your part.

Background noise is the distracting bits of information whose job it is to move you away from reality and into anxiety. For example, you might hear a snippet of conversation in which a co-worker mentions that you’re not qualified for a promotion. If you’re insecure, you might take them seriously. But if you’re secure, you’ll tune them out as an annoying distraction. And why should this be treated as a distraction? Because you really don’t know under which circumstances it was said or

what the motivation was for saying it - or if it was just a repetition of what someone else had said. Or maybe the noise is that promoting someone like you is “just not done” in your organization. My point here is that information taken out of context is just as reliable as fake news.

But what happens when someone approaches you and tells you directly that you’ve got no chance? Here, both the context and message are very clear. But can you really tell why there’s an urgent call for your doomed failure? Unless you’re a mind reader, you can’t. But what you can rely on is that the same thing will probably be repeated to others, including those who might be deciding on your promotion. So, unlike the unreliable background noise, take this direct hit seriously and do the following: listen carefully to what they have to say and be ready to combat it if needed - completely doable with the tools I’ve mentioned above.

When someone tells you that your chances for promotion are slim, you think that they’re probably trying to prepare you for the worst - sort of like a protective parent. While this might be true, a protective parent could actually be causing more damage than what you think. Just by hearing that someone else doesn’t believe you can make it can reduce your belief in yourself  - and unfortunately lead to a self-fulfilling prophecy.

So beware of the so-called protective parent. If the message gets to you that you don’t have a chance, my advice is to turn the situation into a challenge - and show everyone around that you’re going to give it your all to win.  Remember, you’ve already done your homework and know you have what it takes to get the job - so you have every right to compete with others.

The only person who can decide if you have a chance for that next promotion is you. While there will be folks out there who might think otherwise and want to commit you to Middledom, the ball is in your court.

And don’t forget the most important lesson: putting up a fight against perceived odds will show everyone - and more importantly yourself - that you are indeed management material - ready to take on even the toughest challenges as you head towards the corner office.