Coaches: listen to your heart when accepting new clients 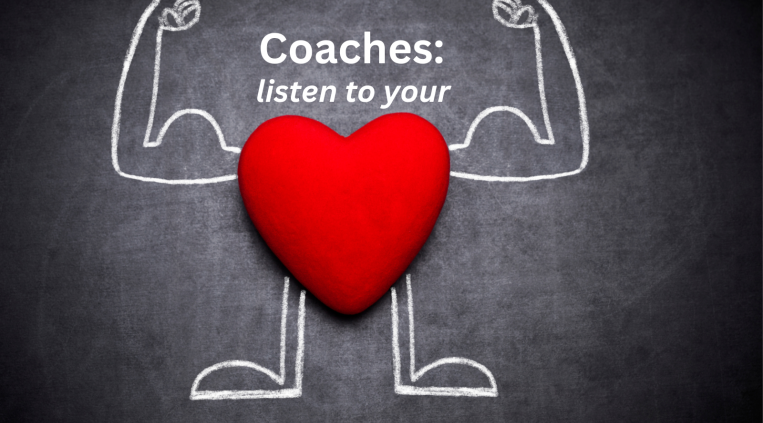 As I watched her playing around with her curry, I understood that my friend and coaching colleague wasn’t up to eating, even though we were having lunch at her favorite Indian restaurant.

“I think I have to turn down a client and I really feel guilty,” she answered as she continued to shift her curry from side to side. She hadn’t even touched her wine, either.

“So if you’re feeling so guilty, why not consider taking them on?” I probed.

“You know the story, Etika. We’ll have two or three sessions and then I’ll begin wishing I hadn’t accepted them, even at generous executive coaching rates” she answered.

“Then it actually looks like you’re smart for turning them down. So why is it bothering you so much?” I asked.

“Well, without getting into too much detail, this time it’s the CEO of a very high profile hi-tech company, with promising executive coaching rates.”

“Yes, but if I tell you about our first meeting, you’ll understand where I’m coming from,” Marlene said.

“Well,” Marlene began. “It started off with the way she spoke to me on the phone. Something in her very cold tone told me that I shouldn’t move things forward. But I did,” Marlene lamented. “I guess it was because she’s so high profile.”

“Fair enough. Been there. Done that,” I admitted.

“So, we set up a meeting at her office the next day. Without even a minute of small talk, she sat me down in front of her desk and complained to me that her team doesn’t get along with her,” Marlene recounted.

“Well, from the sound of how she spoke to you, I’m not that surprised,” I interjected.

“Indeed. But then she told me that the reason she wants to hire me is to force the team to cooperate with her!”

“Wait, Etika, here’s the best part,” Marlene continued. “In the same breath, she asserted that she doesn’t see herself as part of the problem and that she won’t be involved in the coaching process.”

“Pretty low in the self-awareness department, I’d say,” I answered.

“And,” Marlene added. “At the end of the process, she wants a report of which employees I was able to change and who needs to be fired.”

“Is this person for real?” I asked flabbergasted.

“One hundred percent,” Marlene answered. “And she even tried to sweeten the deal by saying that if I succeed, I’ll have a lot more work at her company.”

“So you were tempted?” I asked.

“I don’t know if I was tempted or confused,” Marlene admitted. “I think that I wasn’t really sure how to respond, so I began asking her a few questions about her relationship with her team, what she expects, etc. All of it quickly confirmed my suspicion that she was just looking for someone to create an army of robots.”

“And so I pretty much instantly realized that this wasn’t the kind of coaching work I could or wanted to do,” Marlene concluded.

“I wholeheartedly concur,” I responded. “So why are you upset?”

“Well, the minute I realized this, I became overridden with guilt - professional, business, and even personal guilt,” Marlene said. “So I didn’t tell her ‘no’. In fact, our meeting ended with the CEO instructing her personal assistant to set up a series of meetings between the team members and me. But as I said, I don’t feel that I can go through with it. Yet the guilt is still there.”

“I get it, and I understand where you’re coming from, because, as I said, I’ve been there,” I answered. “So let me tell you a little bit about how I deal with occasional guilt.”

“First off,” I began. “Whenever any guilty feelings begin to appear, I try to nip them in the bud.”

“Makes sense. But how?” Marlene asked.

“By always developing and maintaining my self-awareness, both as a professional and as a person,” I explained. “The better we know ourselves - what’s right for us, what’s not right for us, who we can help, and who we can’t, the better our lives will be.”

“I’m not sure I’m following you,” Marlene admitted.

“You see, Marlene, the sharper our awareness is, the easier it is to make the right choices, whether they are professional or personal. And when we’re sure our choices are the right ones, we don’t feel guilty about them,” I explained.

“So are you saying that you can just turn down a client and not think twice about it?” Marlene asked.

“You bet. In fact, I’ll even feel good about it,” I answered.

“Because you’ve made it very clear to yourself by staying in tune with your self-awareness,” Marlene interjected.

“You don’t even need to ask,” I answered. “I was just going to suggest we meet next week for lunch. But this time, I want to see you enjoy your food!”

“You know, I’m already feeling better,” Marlene said. “And I have a suspicion that as soon as I call a certain CEO, my appetite will return.”

I raised my glass of wine and proposed a toast, “to not feeling guilty”.