How a coach can help clients move from #2 to #1 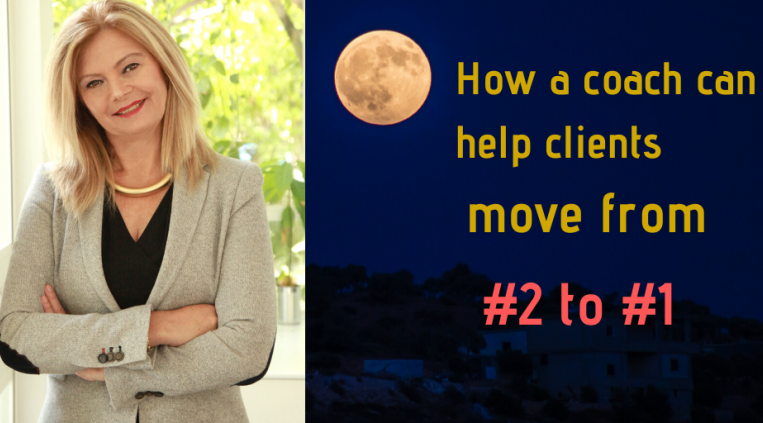 What seems to be the dream of every number two in an organization with regard to corporate development career path? To become number one, of course. But becoming number one is much farther than a hop, skip, and a jump.

Mark had spent the last eleven years in two different VP positions - always with one eye on his target: president, the natural pinnacle of a corporate development career path. And with the company’s recognition of his outstanding record, Mark was always sure that his target was well within reach.

I met Mark one evening at my office. He quickly explained to me that seeing me was not his idea:

“It’s my wife, Kathy. She’s really been on my case the last couple of years. She can’t seem to get her head around the fact that I work until 8:00 pm most evenings, let alone Saturdays, and I still haven’t been promoted to president.”

I continued to listen.

“But to tell you honestly, Etika,” he admitted. “How can an executive coach really help me? No disrespect to you, of course, but I’m the only one that knows what’s happening at my company. I don’t think that any psychological theories will really be of any help.”

I invited Mark to sit down and he hesitantly followed my lead. He continued:

“Believe me, Etika, if you could help me get Kathy off my back, I would be grateful, but isn’t this a tall order for someone like you?”

“I like your candidness, Mark,” I answered. First let’s set some ground rules. You can say anything you want to me, even if you think it might be hurtful.”

“And guess what, Mark, I continued. “Maybe you’re right. Maybe I can’t help you. It’s happened before.”

Mark seemed slightly shocked by my response. After all, what kind of executive coach says they might not be able to help their client? But his face seemed to relax and he became more open.

“Look, Etika, I don’t have anything against executive coaches or other consultants. I even have some subordinates who’ve gotten a lot out of coaching sessions. I just think that it would be sort of mission impossible to help someone with my experience. How could you possibly know what I’m going through?”

“I respect what you’re saying,” I answered. “But let me ask you a question.”

“When a couple sees a therapist because they’re considering a divorce, do you think that in order for the therapist to treat the couple, the therapist needs to have personally experienced a divorce?” I asked.

Mark cracked a slight smile, showing me that he understood my point.

“You don’t have to answer, I can read your face,” I offered. “So Mark, if a therapist doesn’t have to have experienced divorce to treat a couple with marital issues, why do you think that an executive coach needs to have been a CEO?”

I continued, “Why don’t we think of these professionals as being competent in helping others navigate their own experiences, rather than as dispensers of marital or managerial advice?”

“Why is this so important?” Mark asked.

“Because I want you to really believe, Mark, that an executive coach can help you achieve your career aspirations,” I answered.

“Of course, you don’t have to be convinced right away,” I conceded. “But if you’re already here, I’d like for you to at least leave here with some insight as to why you aren’t open to getting any help.”

Mark smiled cooperatively. “Etika, as I told you before, I’ve been a heck of a VP the last eleven years. I honestly don’t think there’s anything that I can do to get myself promoted. It’s just not the right time now for the company.”

“I understand your point, Mark,” I answered. “But would you say that being number two is the same as being number one?”

“To tell you the truth,” Mark answered. “I used to think it was, but lately I’ve realized that the two positions are very similar in terms of day-to-day, but oceans apart when it comes to responsibility.”

I then asked, “Can you try to imagine situations in which number two does an excellent job but can never be number one?”

Mark responded, “Well, theoretically, yes, I suppose, but you’ve got to understand that this is not my situation.”

“Why are you smiling, Etika?” Mark asked.

“Because you really believe in what you’re saying,” I answered. “You see yourself as ready to be number one, yet eleven years have elapsed and you still aren’t there.”

“If you don’t mind, Mark,” I asked. “Let’s explore why you think that getting help from a coach won’t work.”

“Sure,” Mark responded. “First of all, no one else has my experience, so what could they possibly add?”

“And second, I know that I’m ready to be number one; it’s just a matter of the right timing.”

“And when I come to think of it, Etika, I came to you today because of these two points, but thanks to you, it’s really just the second one.”

“Can I ask you something, Etika?” Mark asked.

“Of course,” I responded.

“Judging from our conversation so far, do you think I need help?” Mark asked.

“Well, Mark,” I answered. “As I see it, that’s really not the important question here. What’s important is that we can only help people who think they need help - and are willing to receive it.”

“And regarding what you’ve expressed today, I’m sure everything is well-founded, as it’s based on your personal experiences and circumstances, so I really can’t argue with any of it.”

“But I’m not going to let you leave here empty-handed,” I said. “I’d like you to consider a few things.”

“When someone is stuck in a certain way of thinking, on one hand, it’s good because it shows determination. But on the other hand, it prevents us from seeing the whole picture. We only see a slice of it.”

“And regarding the question of the right timing, I agree with you, but then you’ve given up any control over your own fate. I would encourage you to look for something you can do, rather than just wait for the right time,” I advised.

“That is something to think about, Etika,” Mark said.

“And from my experience, Mark, success blinds us, and then we realize too late that we’ve missed out on some very important things, which are often important changes.”

“Wow, I’ve never thought of success as something that could be so dangerous,” Mark said.

I got up and shook Mark’s hand.

"Mark, I really enjoyed meeting you today. I hope you’ve left with something to think about for your future.”

“I certainly did, Etika,” Mark answered. He pulled out his phone. “Can we schedule our next meeting, let’s say, for Wednesday?”

“I’d love to work with you, Mark,” I answered. “But let’s give you some time to think about why you’ve changed your mind about executive coaching. When you’ve gathered some insight, give me a call and we’ll schedule our next meeting.”

“Will do,” Mark answered.