3 things you must know to sustain career success 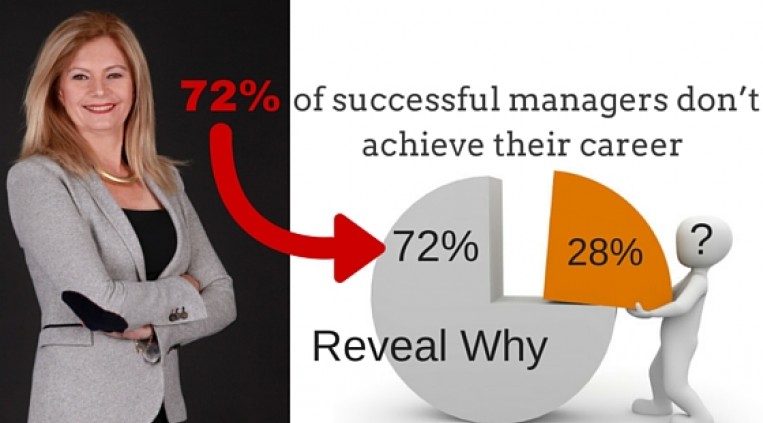 A whopping 72% of successful managers don’t achieve their career dreams - despite all of what they have going for them!

And here’s the kicker: it’s because of their success that they don’t get promoted!

But first a few words about how to measure success at work. Despite what we might think about being successful, one thing is for sure: success depends on circumstances. What makes you successful in one situation might make you unsuccessful in another. So a successful manager is really just enjoying a temporary place in the limelight - which will fade away at some point.

Let’s take Fred, a super-successful manager when it comes to motivating and mobilizing teams. He’s not only effective at bringing folks together, he’s one of the most admired managers as well - so much that his team is willing to go all out for him at a moment’s notice. By all measures of how to measure success at work, a manager like Fred would be one of the first considered for promotion right?

Not so fast. You know the saying: “Every coin has two sides”. On one hand, Fred is a wizard at handling teams. But on the other, spending too much time on nurturing teams often leads to a slowdown in decisionmaking - and even indecisiveness.

The moral of the lesson here is as follows: success is always determined under a specific set of circumstances. Change the role (or the expectations of the role) and you change the definition of “success”. Most managers are always surprised by this.

But back to Frank. While Frank was sure he was the next one up for promotion, he found himself being passed up. Beyond the disappointment and frustration Frank surely felt, there’s a huge question mark: Why? How can such a successful manager such as Frank, who’s even emulated by others, not have gotten the promotion?

This is one of the first questions that many managers have asked me over the years. And the next thing they say to me is usually something to the tune of, “I’m successful on almost all measures and highly valued by my company. Why didn’t I get that last promotion?” What went wrong?

Knowing what went wrong can certainly help you understand what you need to do to avoid this next time - but mostly will deepen your understanding of what it means to be a successful manager.

Like everyone, you were taught that to get ahead in your career, you’ve got to be good - or even excellent - at what you do. And so this is what you’ve been working towards your whole career - paving the path to the top, bit-by-bit. It’s important to note that no one steered you wrong on this one. Excelling at your job is essential for becoming the type of manager your organization would consider for future promotions. But, as we’ve seen with Fred, it’s still not enough…Here are the top 3 reasons why:

1.    What you’ve got is not necessarily what it takes.

In your current role, you haven’t actively developed the competencies needed for a more senior role.  And it doesn’t end here. Sometimes the skills and talents you’ve been growing all along are the very ones that might be blocking your success.

You think that the way to get ahead is by excelling at your current position, rather than developing new competencies. So you harness all of your motivation and march forward, without taking into consideration that you should be looking left, right, or even ahead!

3. You haven’t been listening.

All caught up in the aura of your achievements, you’ve been ignoring the bits of constructive feedback you’ve been receiving all along the way. If you think back, you’ll note that these valuable tidbits could’ve helped you get that next promotion.

Do any of these sound familiar? If so, it’s not the end of the world (or your career). What’s important is that from now on, you work on preventing these situation so that you can achieve the promotion you deserve.

In the next few posts, I’ll be showing you exactly how to take your career destiny into your own hands.